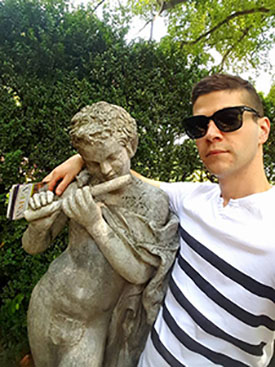 Alan Montroso is a PhD Candidate in his 4th year at the George Washington University. He studies medieval literature, ecocriticism, and the new materialism. His dissertation, tentatively titled “Speluncular Ecologies: Reading Caves and Subterranean Spaces in Medieval Literature,” interrogates the agency and material impress of caves on the characters who inhabit the stony crevasses of the earth. He uncovers the many ways that caves narrate their own material stories, as well as the way that caverns functions as archives of women’s stories, spaces of transformation, and invitations to other worlds. Stories that emerge from the depths of the earth are always entangled in the discourses surrounding gender, race, monstrosity, and disability, and his dissertation argues that a closer look at premodern orientations towards caves unearths previously undiscovered attitudes regarding the medieval (post)human and its multiple enfleshments.

Alan’s writing has appeared in Inhuman Nature and the online, open access journal Lunch. A short piece on the medieval ocean is forthcoming in “Things from the Sea, Vol II: Sea Monsters” from Tiny Collections, and his essay “Crip/Queer Cave Dwellers in The Book of John Mandeville” will appear in a collection on premodern monstrosity and disability from The New Middle Ages series in 2018. He has presented at conferences across the country and as far as Geneva, Switzerland, and looks forward to talking about caves to many more audiences in the future.