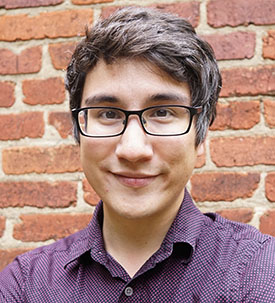 Danny Atherton joined George Washington University's English Ph.D. program in fall 2017. He works primarily with the literature of the medieval period, spanning the fifth through the fifteenth centuries, as well as occasionally late antiquity and early modern England. Some of his work examines the ways in which medieval texts portray time, memory, and community, as well as how ruins figure in the cultural and individual imagination as sites of nostalgia, melancholy, lamentation, connection, and creation. The primary source materials he tends to work with were originally composed in Old English, Old Norse, Old French, Medieval Latin, Anglo-Norman, and Middle English. He is especially interested in the history of emotions, affect theory, sensory studies, phenomenology, material culture, and ecocriticism. Some of his current research explores the performative and affective means of expressing traumatic after-effects in medieval literature and the ways that such expressions may shape not only literature but also religious and cultural rituals, art, the landscape, and architecture. He is also interested in the desire to archive and its connections to trauma, grief, loss, and longing, especially with consideration to the ideological paradigms through which societies and individuals recall and interpret the ephemeral.

Prior to his time at GW, Danny earned his master's degree in English from Georgetown University (2015-2017), having written a master's thesis entitled "The Passing of Things: Loss, Remembrance, and Community in Anglo-Saxon and Old Norse Literature." He holds a bachelor's degree in English from Whitworth University (2005-2009), where he was formally introduced to the field of medieval and early modern studies. Between his undergraduate and graduate years, he spent four years working through the Japan Exchange and Teaching (JET) Program in rural public schools in Osaka Prefecture (2009-2013). Outside the Department of English, Danny enjoys his work as a Writing in the Disciplines (WID) team lead graduate assistant, teaching two writing sections each semester in the Business Administration program for BADM-2001W: Markets and Politics. In addition to this, from his time at Whitworth and Georgetown, he has a combined five years of experience as a Writing Center consultant. He is dedicated to compositional pedagogy and working with people at all stages of the writing process.