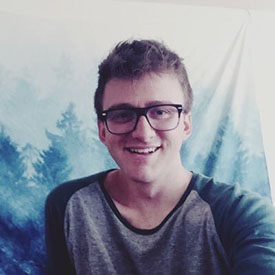 Brady James Forrest is a PhD student in the Department of English at the George Washington University. Broadly, his research focuses on representations of disability and queerness in 20th century literature and 21st century visual culture. More specifically, he is working towards a dissertation that intervenes in existing work on queer temporality and affect through an exploration of queer transnational film, television, and music videos, the Marco Marco runway shows, and live music and spoken word performances as sites of liminality that resist claims on or about futurity.

He has presented work at the American Studies Association Annual Meeting, the Mezipatra Queer Film Festival, the Museum of Popular Culture Conference, and the DC Queer Studies Symposium.

In the 2014-2015 academic year he was a GW University Archives Diversity Research Fellow and in 2015 he received a Jeffrey C. Kasch Foundation Student Research Grant. His current research is supported by a GW Columbian College of Arts and Sciences PhD Fellowship. He received his Bachelor’s degree in Global and International Studies from UC Santa Barbara and his Master’s degree in American Studies from the George Washington University. Contact: [email protected]