Below is a sampling of updates from the Fall 2015 English Newsletter. To read the full newsletter, click on the thumbnail to the right. 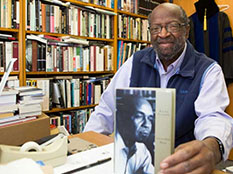 The English Department is mourning the loss of Professor Jim Miller, our colleague, teacher, mentor and friend, who died on June 19, after a year-long battle with cancer. Jim was a highly-respected scholar and beloved teacher in English, American studies and Africana studies whose work focused on African American literary and cultural studies across the 20th and 21st centuries, often with a specific focus on the Washington, D.C., area.

"Dr. Miller was born in Providence, R.I. He joined the GWU faculty in 1998 after having taught at the University of South Carolina and at Trinity College in Hartford, Conn. At GWU he taught a course on ‘Black Culture in the Nation’s Capital.’ He lectured often to D.C. public-school classes at the School Without Walls.

He was author of a 2009 book, Remembering Scottsboro, about the 1931 trial and conviction of nine black youths accused of raping two white women in Scottsboro, Ala. He had written chapters in books about Washington and had reviewed contemporary African American literature in The Washington Post."

Jim received his AB in English from Brown in 1966 and his PhD in English from the State University of New York at Buffalo in 1976, with a dissertation on “The Struggle for Identity in the Major Works of Richard Wright.” He taught popular courses at GW on Wright, James Baldwin Ralph Ellison and others. As GW Today notes in a piece accessible here, while an undergraduate at Brown, Jim had met Ellison himself. In 2009, Jim was a Fulbright Scholar in the Department of English/School of Literature and Language Studies at the University of The Witwatersrand in Johannesburg, South Africa. He received the Dr. Martin Luther King, Jr. Award from GW in 2008 and the Carnegie Foundation for the Advancement of Teaching District of Columbia Professor of the Year Award in 2002. In 2012, he received a Distinguished Alumni Award from the University of Buffalo’s Alumni Association Award. At the time of his death, Jim was completing a new project on trans-Atlantic Black cultural production, studying musicians and writers with connections to South Africa, England and the United States.

We want to honor these many accomplishments, of course, but Jim's colleagues and friends have also been searching for the words to describe what a gentle, kind, thoughtful man he was. We feel his loss profoundly; everyone in the English Department ended up in Jim's office at some point, because everyone valued his advice, his wisdom, his quick wit. Rest in Peace, Jim Miller. We love you and we miss you.

A short video of Jim Miller speaking about the Scottsboro case, the subject of his book, "Remembering Scottsboro" can be seen here.

Photo: Professor James A. Miller in his English Department office

A Celebration: Song, Quilts, Cather, and the Work of Ann Romines 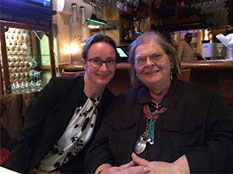 On October 2, the English Department hosted an afternoon focused on the multi-faceted work of Professor Ann Romines, who retired this year after 43 years of service to our department, attended by Professor Romines and many friends, colleagues and students.  Sponsored by the Wang Endowment in the Department of English, the afternoon included music, a panel of former students and a keynote address by Guy Reynolds, professor of English and director of The Cather Project at the University of Nebraska-Lincoln.

Ann Romines is well known for her work in Willa Cather studies, and has also published widely in American literary studies and women's writing more generally. Professor Romines has been an active member of the Willa Cather Foundation's Board of Governors for more than 20 years. She has been involved in numerous editing projects connected to Cather Studies, including the scholarly edition of Sapphira and the Slave Girl (2009) and Willa Cather's Southern Connections: New Essays on Cather and the South (2000). Most recently, she was the editor for At Willa Cather's Tables: The Cather Foundation Cookbook (2010). Professor Romines is also the author of a wide range of books and articles, including The Home Plot: Women, Writing, and Domestic Ritual (1992) and Constructing the Little House: Gender, Culture, and Laura Ingalls Wilder (1997), which received the Children's Literature Association annual award for best scholarly book on children's literature. As a teacher, Professor Romines developed popular classes on these and other topics, including signature courses on Western writing and on old age and adolescence.

The afternoon featured a performance in the Music Department of "The English Teacher's Aria," from the Operatic Adaptation of Willa Cather's short story, "Paul's Case." After a short introduction to the story, singer Millicent Scarlett performed, accompanied by the composer himself, Gregory Spears. Reconvening in the Textile Museum, we heard scholarly tributes by Charmion Gustke (Belmont University), Michael O'Neill (GW), Lisbeth Fuisz (Georgetown University) and Naomi Lesley (Holyoke Community College).

In summarizing his keynote address, "Reading Cather through the Romines Lens," Professor Reynolds has written, "This talk will look at how literary-historical scholarship, of the sort Ann Romines so masterfully practices in her edition of Cather's Sapphira and the Slave Girl, radically shifts and deepens our understanding of fiction. Tracking across the novel, and the fascinating cultural problems Cather represented in her last work, we will see how Professor Romines' scholarly editing sharpens our sense of the complex subtexts of a narrative."

In keeping with Professor Romines' love and expertise in material culture, a select sample of her famous quilt collection was displayed throughout our meeting in the new GW Textile Museum on 21st Street, NW. 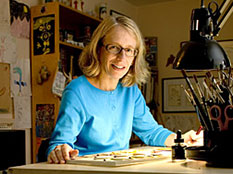 Jewish Literature Live, the course that brings Jewish writers to campus to talk about their work in person with GW English students, will be held again in spring 2016. Leading the roster are Aryeh Lev Stollman, author of The Far Euphrates; Judy Viorst, author of Necessary Losses; and  Roz Chast, author of Can't We Talk About Something More Pleasant? Other authors will be announced soon on our department website. "The author visits are funded by a generous grant from David Bruce Smith, BA ’79, and arranged by creative writing Professor Faye Moskowitz, the course creator and instructor. The course explores the ongoing question of what it meant to be Jewish—and writing—in the 21st century.

Photo: Roz Chast, cartoonist and author of Can We Talk About Something More Pleasant?

Rebecca Boylan, PhD ’07, is beginning her eleventh year teaching in Georgetown University’s Department of English. She also mentors English masters and Library studies PhD theses and is curriculum director for masters students teaching in College Prep. Her book on Time, via Hardy and Woolf, is forthcoming.

Jordan Coggins, BA ’15, is currently living and working in Los Angeles as the assistant to the COO of Amazon Studios, the new television and film production arm of Amazon.com.

Joanna Falk, BA ’13, is pursuing a masters in English literature at the University of Maryland College Park and is interested in global modernism, feminist criticism and poetry and poetics. She also works full time as an office manager of a small law firm in D.C.

Blake Gaines, BA ’10, is finishing the last year of his JD/MBA program and working as corporate counsel for a technology start-up, where he brings his golden doodle to work every day!

Doug Kulchar, BA ’13, is pursuing a PhD in English at the Pennsylvania State University, with a focus on ecology and critical theory.

Dawn Li, PhD ’97, has recently started doing creative writing after a decade of work in the government consulting business.

Megan A. Moore, BA ’12, studies at Temple Law and focuses on energy, environment and community advocacy. She conducts legal research for Greenpeace through the Institute for International Law & Public Policy at Temple, and recently presented on environmental Justice at City University of New York.

Greg Nanni, BA ’11, is a playwright currently in a play development lab at Passage Theatre in Trenton, N.J. He runs an affordable open access playwright's workshop called The Playwrights' Happy Hour, and his play THE TRAVELLER will be produced in 2015 in Philadelphia.

Karrene (Kay) Phillips, BA ’01, works as a social worker for Children's Services in Southern California. When she is not working, she loves spending time with her husband of 11 years and her children, Karyce, Kenadi and Antoan II (twins) and Aria.

Meredith Pond, BA ’70, recently attended the Vermont College of Fine Arts Post-MFA Conference in Montpelier, Vt., where she took part in a creative nonfiction workshop led by Joan Wickersham. Look for her short fiction in Gargoyle Magazine #64, available in December 2015.

Richard Shelala, BA ’03, recently completed his MBA from the New York University Stern School of Business. He is currently working as the director for Compass Forwarding.

Sara Stroman, BA ’02, is currently collecting photos of hearts around the world through her website www.hearteds2.com, which is an extension of S2 Stationery & Design, her stationery company.

Rebekah Troutman, BA ’15, is currently pursuing her Master of Tourism Administration from GW and is working at the San Francisco Travel Association in Washington, D.C.

Vicki Ungar, BA ’74, recently celebrated her 26 year anniversary as practice manager at a 24/7 animal hospital in New York. After years in advertising/PR, she has been lucky to find a job that combines her passion for animals with her people, marketing and organizational skills.