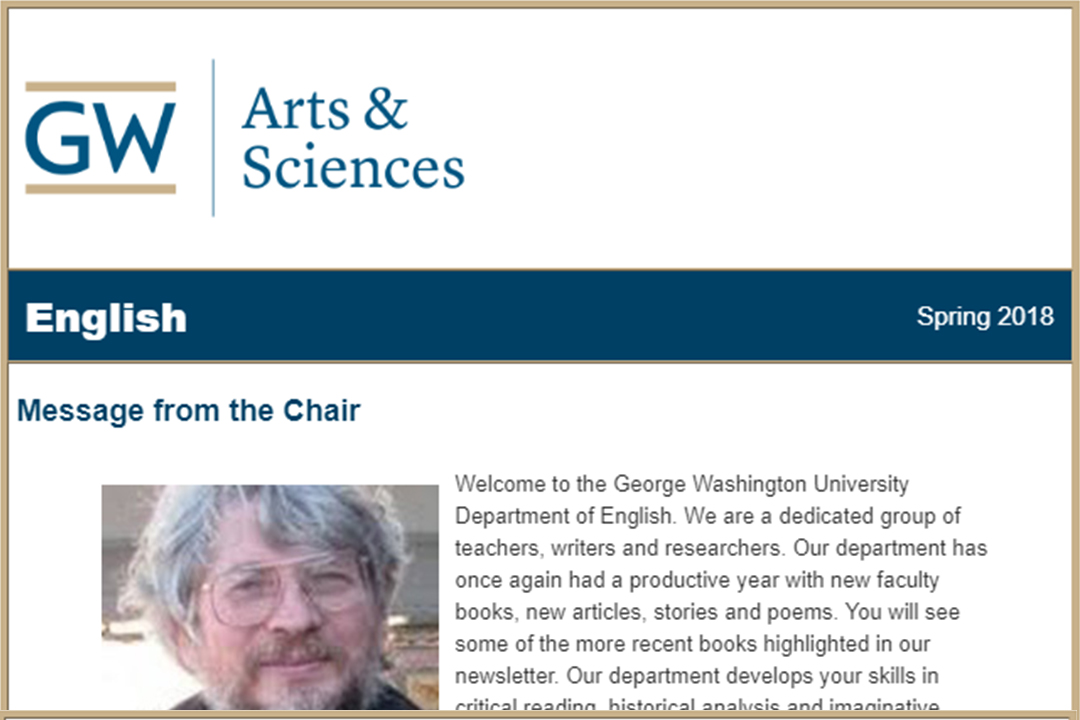 Message from the Chair

Welcome to the George Washington University Department of English. We are a dedicated group of teachers, writers and researchers. Our department has once again had a productive year with new faculty books, new articles, stories and poems. You will see some of the more recent books highlighted in our newsletter. Our department develops your skills in critical reading, historical analysis and imaginative thought. We offer general survey courses in many fields of literature and creative writing. We offer specialized courses important for our majors and also courses of broad interest to students across the university. We have been innovative in the introduction of new courses, and we have a new website soon to go online. We invite you to explore our web pages, read our blogs and newsletters and let us know what activities you would like us to introduce. 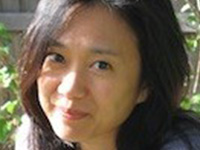 Professor Jennifer Chang's new book of poetry, Some Say the Lark, (Alice James Books, 2017) was a semi-finalist for the 2018 Pen Open Book Award, given "to an exceptional book-length work of any genre by an author of color published in the United States in 2017."  Click to see what people are saying about Some Say the Lark.

Daniel DeWispelare publishes Multilingual Subjects: Standard English, Its Speakers, and Others in the Long Eighteenth Century.

In the 18th century, the British Empire pursued its commercial ambitions across the globe, greatly expanding its colonial presence and with it, the reach of the English language. A standard form of English was taught in the British provinces, just as it was increasingly exported to colonial outposts in North America, the Caribbean, South Asia, Oceania and West Africa. Under these conditions, Standard English came to obscure other forms of multilingual and dialect writing, which were made to seem inferior, provincial or foreign oddities. Multilingual Subjects documents how different varieties of English were sidelined as "dialects" and asserts the importance of multilingualism and dialect writing to 18th century English-speaking cultures. By juxtaposing the lives and texts of rarely compared English speakers, such as slaves, indentured servants, translators, rural dialect speakers and others, Professor Daniel DeWispelare reveals the tremendous aesthetic value of these voices even in the very era when Standard English came to dominate the English-speaking world. Read Catherine Kushon's interview of Daniel DeWispelare on this exciting new book (University of Pennsylvania Press, 2017). 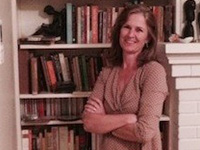 Following up on her first book, Framing the Victorians: Photography and the Culture of Realism (Cornell University Press, 1996), Professor Jennifer Green-Lewis rethinks the role of photography in Victorian and Modernist English literature in her newest book, Victorian Photography, Literature, and the Invention of Modern Memory (Bloomsbury Academic, 2017). Invented during a period of anxiety about the ability of human memory to cope with the demands of expanding knowledge, photography not only changed the way the Victorians saw the world, but also provided them with a new sense of connection with the past and a developing language with which to describe it.

In the book's introduction, Green-Lewis writes, "My questions in this book…are simple, although they are not easily answered: How did the Victorian culture of photography change how people organized and narrated past experiences? … [W]as the ‘memory crisis’ of the nineteenth century a response to the invention of photography, or is photography more helpfully understood as an expression of that crisis?  Might an answer to that question help us understand our own mnemonic practices? Signs are everywhere:  in...trade journals, in periodicals intended for the amateur photographer; in...correspondence, in cultural reflections published as monographs or...in popular magazines; and above all in literary representations of time's passage which,...during the nineteenth and early twentieth centuries were increasingly rendered in pointedly visual terms.

"[This study explores] photography's role not just in memory and literature but also in historical imagination. As a term, ‘historical imagination’ suggests an interaction with the past that is more creative, inclusive, and kinetic than the term ‘historical consciousness,’ and for that reason seems to me more apt. Imagination, moreover, is the primary substance of the novel, no matter how much it may profess to show its readers the way things are. It should be clear, however, that the imagination under consideration in this book belongs not only to the Victorians, who introduced photography to history, but also to us, photography's twenty-first-century collaborators. Just as photography became a part of the Victorian sense of the past, so we continue to fold that sense of the past into our own."  ("Introduction: Stars from the Empty Sky.")

Jeffrey Jerome Cohen has teamed up with scientist Linda T. Elkins-Tanton to co-author Earth: Object Lessons (Bloomsbury Academic, 2017), an examination of the planet from the perspectives of a planetary scientist and a literary humanist. They've written: "Beautiful and self-contained, the Earth turns out to be far less knowable than it first appears....how can humans apprehend the distances, the temperatures, and the time scale on which planets are born, evolve, and die?"

Robert McRuer's Crip Times: Disability, Globalization, and Resistance (New York University Press, 2018) asks how disability activists, artists and social movements generate change and resist the dominant forms of globalization in an age of austerity—or "crip times." With examples from South Africa, Brazil, Chile and Thatcher's U.K., Professor McRuer analyzes how transnational queer disability theory and culture—activism, blogs, art, photography, literature and performance—provide important and generative sites, both for contesting austerity politics and for imagining alternatives. He demonstrates that disabled people are demanding that disability be central to our understanding of political economy and uneven development.

Robert Becker, BA ’63, says “English lit was the best decision I made back then.” After several professions, including speech writer for a cabinet level official, Robert is now an Episcopal priest with a doctorate in Christian Spirituality.

Michael Bennett, BA ’02, is associate professor of English at the University of Wisconsin-Whitewater. Bennett recently published his tenth book (his fifth monograph), Analytic Philosophy and the World of the Play (Routledge 2017).

Zachary Bennett, MA ’12, will complete his JD at GW Law School in 2018. He had the greatest honor of his life as the teaching assistant for Dystopian Visions, a course taught this fall in the CCAS by his political hero, Senator Rand Paul.

Bailey Blumenstock, BA ’17, is pursuing an MFA in creative writing at American University.

Mary “Beth” Buhot Runquist, BA ’97, is working as the assistant director of the Writing Center at Seton Hill University in Greensburg, Penn.

Jenny Burkholder, BA ’93, published a poetry chapbook titled Repaired (Finishing Line Press, 2016). She collaborated with her husband on an article about immigrants and refugees posted on 500pens.org. She teaches English at Abington Friends School.

Christine Coleman, BA ’91, is associate vice president in the University Communications and Marketing Department at Villanova University. In this role, she oversees academic and advancement communications for the university.

Joseph DeFilippi, BA ’95, enjoyed his time at GW and even met his wife, Jennifer, BA ’95, in a creative writing class with Maxine Clair. Joseph eventually went to law school and now works for Thomson Reuters. He and Jennifer have 10-year-old triplets and live in the Princeton, N.J., area.

Keith Feldman, MA ’03, was recently promoted to associate professor with tenure at UC Berkeley, where he teaches in the Department of Ethnic Studies.

Amit Goel, MA ’05, has been working as an instructional designer and administrator in higher education for some 13 years. Amit has also worked as a professor at Strayer University.

Lucas Hagerty, BA ’12, serves as strategy director for advertising agency 3 Sons. However, he is most excited about founding writt.org, which raises awareness/funds for literacy organizations through news and daily quotes on Instagram/Facebook.

Moshe Horn, BA ’89, just opened a new law firm with two partners specializing in litigation in New York. He is always happy to help GW alums and hopes all his fellow Colonials are doing well.

Haley Lewis, BA ’08, earned a JD and MPA in 2013 and has been working as a staff attorney for Gasp, a nonprofit working to improve air quality in Alabama. She also welcomed her first baby, Vivian, in May 2017.

Vergie Lois Taylor, MA ’67, has retired from the Department of English at Howard University. While spending time between the Low Country of South Carolina and Washington, she still finds time to engage in researching, writing/journaling and volunteering.

Kate Mahoney, BA ’09, currently works as the regional director of operations at KIPP, a charter school network in Baltimore.

Gail (O'Donnell) Obenreder, BA ’71, is a 2016 fellow of the Eugene O'Neill Theater Center's National Critics Institute who writes critically on the arts for Philadelphia's Broad Street Review (broadstreetreview.com) and for the Wilmington (Delaware) News Journal.

Kelsey O'Brien, BA ’11, and Nicholas Arazoza’s wedding will take place in May 2018 in Center Moriches, N.Y. Kelsey is an associate attorney practicing in N.Y.; she represents hospitals, physicians and their private practices in medical malpractice actions.

Gail Orgelfinger, BA ’72, will publish her new book Those Cursed Breeches: England's Joan of Arc with the Pennsylvania State University Press in 2018.

Michelle Owings-Christian, BA ’78, is finishing a work in progress (novel) that she hopes to send out for readers by the end of March.

Anna Sicari, BA ’09, is an assistant professor in English at Oklahoma State University, where she also directs the University Writing Center.

Michael Slevin, BA ’97, is a psychoanalytically-oriented psychotherapist in private practice who also evaluates people in crisis in an urban ER in Baltimore. He is completing a co-edited book proposal of 35 essays on Race in the Therapeutic Encounter.

George Stapleton, BA ’61, is just completing his fifth book about growing up in Middlesboro, Ky. George’s four other books include Stapletone Chronicles, Lazarus the Beloved Disciple, Sermons by George and Cephas. His latest book will be entitled Just a Hillbilly.

Jean Stipicevic, BA ’68, retired in 2011 from her position as managing editor of The American Scholar magazine, where she worked for 39 years.

Vicki Ungar, BA ’74, found her dream job, thanks to her dog Molly, after working in advertising for several years post graduation. A former client, Vicki has served as practice manager at Park East, a 24/7 small animal hospital located in NYC, for 28+ years.

THANK YOU FOR YOUR SUPPORT!

The Department of English would like to gratefully acknowledge the following generous donors who made a gift to the department from July 1, 2016 – December 31, 2017.

Gifts to the Department of English allow us to provide support for faculty and student research and travel, graduate student fellowships, and academic enrichment activities including guest speakers, visiting faculty, and symposia. Each gift, no matter how large or small, makes a positive impact on our educational mission and furthers our standing as one of the nation's preeminent liberal arts colleges at one of the world's preeminent universities.

You can make your gift to the department in a number of ways: 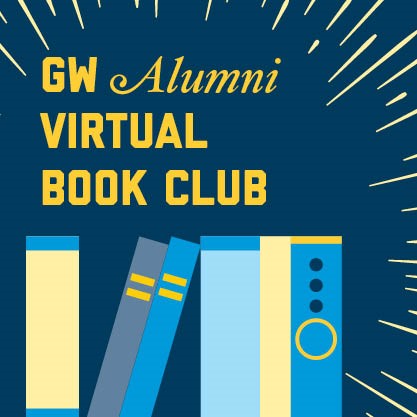 Connect with fellow alumni professionals through one of GW’s 8 industry networks, in areas such as media & communications and marketing & advertising, and more. 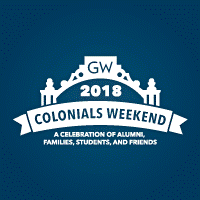 A reunion celebration is only a success if your classmates come back to celebrate with you. Classes ending in "3s" and "8s" are celebrating reunions this year! We need a strong group of reunion ambassadors who are willing to help create a buzz leading up to Colonials Weekend. No matter the amount of time you are able to commit, we have an opportunity for you! Email [email protected] to learn more.